I’m very happy to present a translation patch for this wonderful game called Star Cruiser. I hope more people will now be able to play this FPS/action RPG which undeservedly fell into obscurity.

This game may probably be considered as one of the first FPS games (first person shooter – albeit with RPG elements), it was releasedwell before Wolfenstein 3D, or Doom for that matter. Graphics look pretty dated, of course, but the game still holds up and is very playable.

(from Wikipedia article: https://en.wikipedia.org/wiki/Star_Cruiser)The game involves the exploration of four solar systems with over 30 planets and dozens of characters.It is viewed entirely from a first-person perspective, with 3D polygon graphics used to represent outdoor environments, trees, benches, buildings, and other objects,as well as enemies. The gameplay can vary depending on the environment. 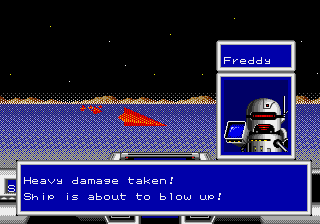 In a city, the player character can move around town and enter various buildings to interact with non-player characters, who are represented with an anime-like appearance, or leave the city and go into outer space.When the player goes into outer space, they can fly to other planets, moving around in free flight, but occasionally encountering enemies and engaging in space combat. There is an autopilot feature available, setting the spacecraft to automatically go to a set destination, but the player may still encounter enemies along the way. There is also a warp feature available, allowing the player to warp to different locations, but this requires energy. On various planet surfaces, the player will explore enemy bases and combat enemies on the ground. At enemy bases, the game plays like a first-person shooter, exploring a dungeon while moving, strafing and shooting enemies in a first-person perspective. Enemy bases usually need to be cleared by finding hidden keys, unlocking doors and finding key items and objects.

It does not use a traditional levelling system, but uses various role-playing game elements. The player can acquire different weapons and  customize craft to an extent, while needing to upgrade equipment,the shields which are basically hit points, the space craft’s speed of movement in outer space, and the energy needed to move around, shoot, travel and warp between destinations. The player can also visit any mechanic to repair equipment and shields as well as restore energy.

The most of the game’s text is compressed with a rather simple dictionary algorithm: it has two parts – the text itself and dictionary parts are adressed with two bytes. Both of these parts have pointer blocks on top of them with a relative offset every 16 bytes and a single byte for each line, meaning the string length.

So, I combined them and extracted all the text. Then I extended ROM by 256 kilobytes and inserted it back uncompressed just to test if the game would work like this. It turned out that it works fine, so I proceeded with the translation. 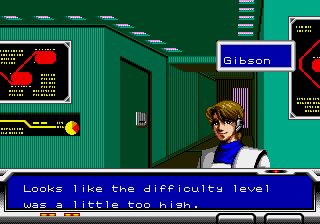 An interesting thing is that originally this game had “‘” and “&” characters automatically replaced with “YOSHIMURA” and “(ARSYS)”. Those are actually used in the ending credits, but the game uses this hook for all the game text output. Pretty strange indeed. It prevented me from using apostrophes and ampersand characters.

“Let’s go” thus looks like “letYOSHIMURAs go”. So, I hacked this hook and replaced it with other characters, which are not used for text.

As usual, weapons and items uses limited space and cannot be translated without either hardcore ASM-hacking to make the game display items with more characters than 12 (and 8 for the weapons), or use abbreviations, which are not always understandable.

I chose the second option obviously, as it’s overall much less time-consuming. So, I made a table below with the proper names for items. 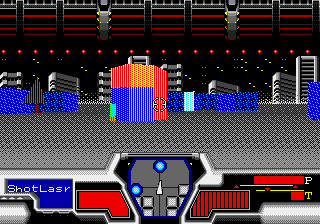 From cccmar: the translation itself was challenging in many parts, mostly because of contextual issues. The game’s plot is very 80’s – lots of intrigues, unexpected turns of events and all that good stuff. It’s worth noting that the SMD version differs substantially from other versions in terms of characters, certain plot-related events and even the open-endedness of the gameplay as such. Overall, I’d say that translating, or rather retranslating some parts was also difficult due to the fact there were a few untranslatable jokes in there. Thankfully this game isn’t really all that “Japanese,” so there wasn’t much stuff to localize. All in all, a really fun project to work on, I hope you enjoy the final result. 🙂 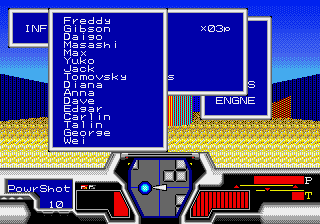